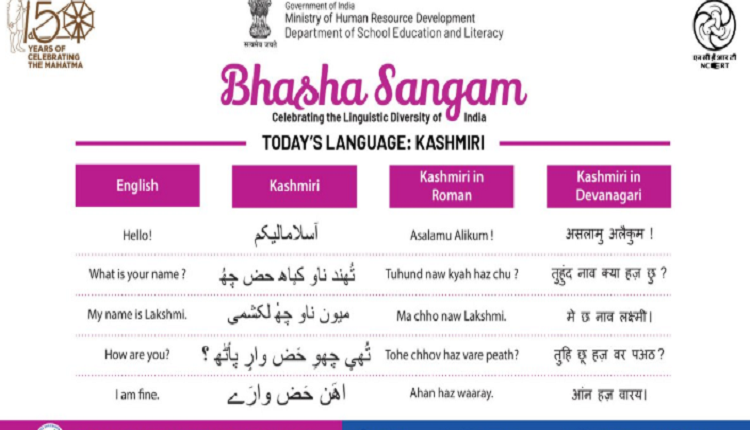 In order to celebrate the linguistic diversity of our country, HRD Ministry recently launched Bhasha Sangam. Under the programme, it intends to introduce school students to 22 Indian languages. Talking about this initiative, HRD Minister Prakash Javadekar on November 22 tweeted, “Bhasha Sangam, an initiative under Ek Bharat Shreshtha Bharat, is just beginning of a journey meant to create interest in different Indian languages and curiosity to learn more.” Every day (for 22 working days), five simple, commonly used sentences from each language are shared with school students.

While the initiative needs to be lauded for creating awareness and respect for different Indian languages among students, the programme drew huge criticism from people on December 3 (Monday) when it featured Kashmiri language. The ministry uploaded the image (given above) under Bhasha Sangam’s language of the day. It was criticized as the translation of these five sentences didn’t reflect the essence of the language in totality, because it presented the version that is spoken by one community of the state. This translation would have appeared different had HRD ministry taken into consideration the way other communities speak the language, something that netizens pointed out:

By the end of the day, the HRD ministry issued a clarification and withdrew the sentences/translations:

Sentences/translations in Kashmiri under Bhasha Sangam were prepared by NCERT in association with language experts from Deptt of Education, J&K & University of Kashmir. @HRDMinistry is sensitive to the comments raised & has therefore decided to withdraw them.@PrakashJavdekar

Six Interesting Ways to Celebrate Children’s Day in Your School