Have a Glimpse of Comet NEOWISE Before it Disappears 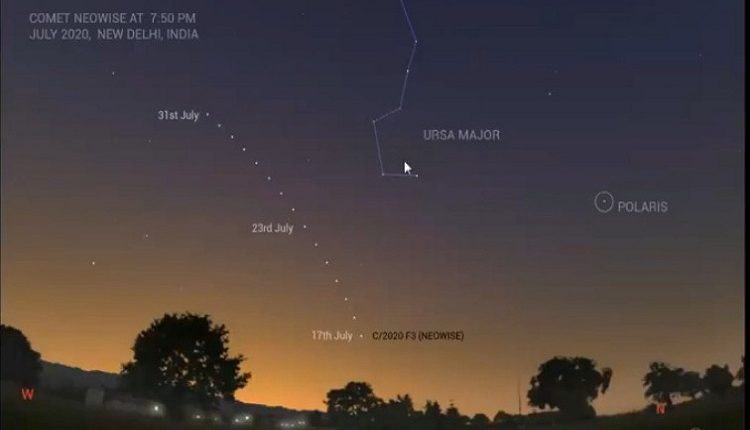 Comet NEOWISE, officially known as C/2020F3, is the brightest comet that can be seen in the sky and is visible across the globe these days as it is closest to the earth. The comet once disappears will be visible only after 6,800 years.

“The comet has been found close to the sun during early July, which came in the view of NASA’s solar mission SOHO, which exclusively studies the sun and its activities,” said Dr N Ratnashree, director, Nehru Planetarium, New Delhi. She was speaking at ‘Comet NEOWISE – A Primer,’ a part of Lockdown Lecture series organised by Nehru Science Centre. “Point your DSLR camera towards north-west direction and try to take a long exposure shot. Try clicking regular photographs on different days at the same time with the same camera settings to find out the trajectory of the comet in relation to the horizon,” she said.

The comet can be seen in clear sky conditions in areas with lesser light pollution and will be perfectly visible when the sky is dark. Today is the best day to see the comet

The comet is also visible to the naked eye, but one may find it difficult to locate it in the sky especially those trying it for the first time.

“Those trying to observe the Comet should first locate the constellation Big Dipper (Ursa Major) or Saptarishi, the seven stars in the sky. Once it is located, try to find the part which is pointing towards Polaris. The comet will be visible in the opposite direction of the Polaris or the Pole Star,” she said.

Dr Ratnashree also suggested websites that will help in finding out the celestial bodies. Star gazers who are interested in observing such celestial events can use https://calsky.com/ and https://darksitefinder.com/ to find the coordinates of the exact location of the celestial objects. Also, with the help of https://mausam.imd.gov.in/ one can know in advance the position of clouds which may hinder the clear view of the sky. The speed of the wind can also give us an idea as to predict the movement and the direction of the cloud over a particular area.

The comet can be seen in clear sky conditions in areas with lesser light pollution and will be perfectly visible when the sky is dark. Today is one of the best days to see the comet because it will be closest to Earth. With each passing day, the object is moving away from the sun and is becoming fainter day by day.

Comet is an icy small body which consists mostly of rocky materials, dust and ice. As they come closer to the sun there is evaporation of volatile contents from these comets. When they start melting, the particles start glowing by the reflected sunlight. This makes the ‘dust tail’ of Comets.

Seven ways to celebrate Diwali in a different manner