REPORT: When students measured the circumference of the earth 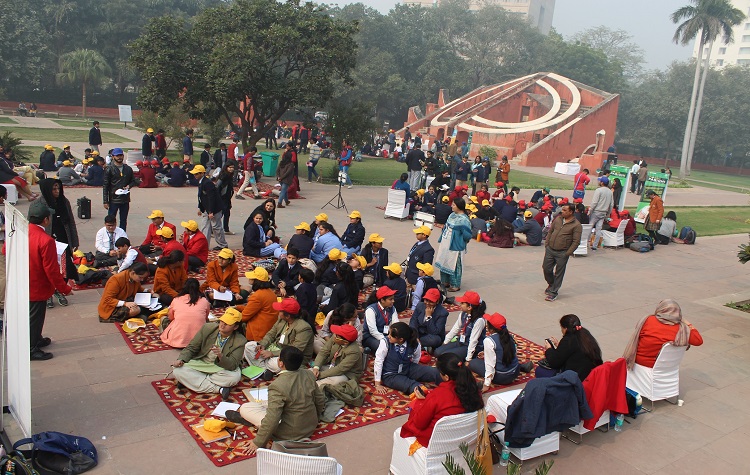 Nearly 200 students from 42 different schools assembled at Jantar Mantar, Delhi on Winter Solstice (Dec 21) to measure the earth’s circumference. Organised by SPACE under its flagship programme, Project Paridhi, students replicated nearly 3,000 years-old Eratosthenes experiment. They measured sun shadows at the Masonic heritage structure to find the shortest shadow and thus determined the local noon timings. Further, by knowing the sun’s declination on that day, and using simple trigonometry, they were able to calculate the circumference of the earth.

“We enjoyed this activity. It was fun.” The students, no matter the school, were unanimous in their response.

“Activities like these teach teamwork to students, gives them better perspective of things. They are able to make practical use of the theory taught in class. Plus, it gives wings to their creativity,” said Neeta Gupta, maths teacher at Lotus Valley International school, Noida, UP.

Similar views were echoed by other teachers as well. Geetanjali, teacher, Amity International School, Gurugram, Haryana, said, “Students are very excited about it. They learn a lot through these activities. It teaches them to put their (bookish) knowledge to practical use.”

Students from class 6 to 8 participated in this programme. Dr D. N. Dimri, Director (Monuments), ASI was the chief guest of the event. A heritage walk was also organised for teachers and the general public wherein the working of these ancient instruments was explained.

Project Paridhi was launched in 2010 and is now conducted four times a year on days of solstice and equinox. Winter Solstice is the day that officially marks the start of winter and has the longest night and shortest day of the year.

In the past, more than 3,000 students as well as public, NGOs, media etc. from different parts of India as well as the world have participated in this project and calculated the earth’s circumference up to 99% accuracy.

“People are losing touch with their own culture”

Wondering What’s The Future Of Sports In India? Then Read On