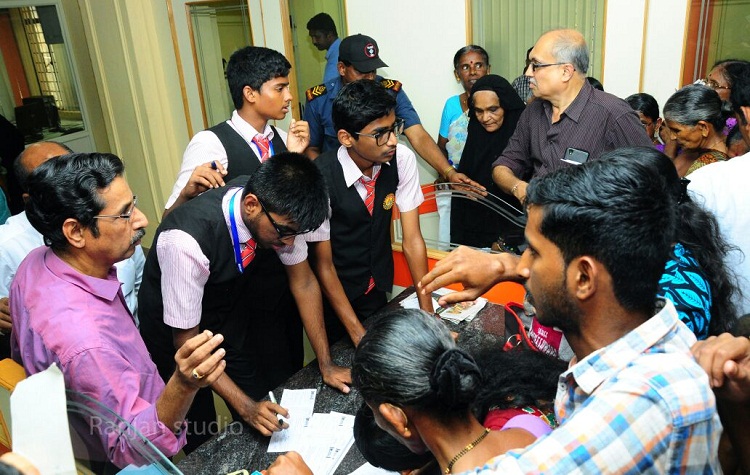 Even as most schools are busy trying to figure out a solution for fee deposits on time following demonetization drive, Rotary English Medium School, Moodbidri in Karnataka has decided to make the best of the situation and teach its students a lesson in humanity.

“When we saw huge queues outside banks  where illiterate people were struggling to fill forms and elderly were finding it tough to stand for hours, we decided to lend a helping hand,” said Vincent D’Costa, Principal of the school.

Students of Class IX were chosen for this mission and given appropriate training in various tasks like how to fill withdrawal or exchange forms. “The children would fill the applications and guide people to appropriate counters. Since some people were unable to count different denominations of notes, children would do that for them and facilitate their speedy deposit,” he said.

And that’s not all. Tokens were issued to the crowd to ensure order in the bank. Drinking water too was provided to those waiting in queues. The children provided their assistance during the peak hours of 10 am to 1.30 pm.

“We divided our students in small teams. Every day, a new team would go to the bank and help people. That way, we ensured that students are not repeated and their studies remain unaffected,” said D’Costa.

The officials at Syndicate bank couldn’t have asked for more. “When we began to help people, we could see a relief on the faces of elderly. One day, we were late, and the bank officials called us to find out whether we were coming or not,” said D’Costa. “I must appreciate the way bank staff is patiently working to help the crowd.”

Seven things to look for when choosing a preschool