This is how this kid fought bullying; and netizens are loving him 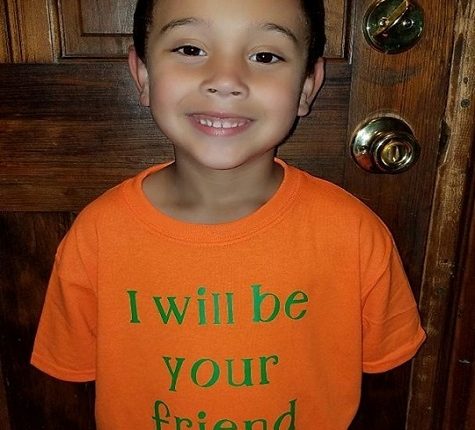 Nikki Rajahn asked her six-year-old son, Blake, about the kind of design he would like to have on his t-shirt as a gift for the first day of class at North Fayette Elementary School in US. The son’s response left her surprised.

“I have to brag on my son. I told him that as a back to school gift, I will make him any shirt he would like. It could have anything- a basketball theme, football, etc. which are all his favorites. He thought a while and said, “will you please make me a shirt that says ‘I will be your friend” for all the kids who need a friend to know that I am here for them?” she writes in her facebook post. “Never underestimate your kid’s heart for others! I love my sweet Blake!” She ended her post with #stopbullying

People all over the world are praising the child. Such has been the response to the post that Rajahn, who runs her own personalisation company by the name Unfading Adornments, took to Facebook again to thank people for their overwhelming response, “Thank you so much for all the support and kind words! I am trying to keep up with everyone’s comments and read them all to Blake and so far he is blown away! He doesn’t understand why everyone thinks this is a big deal because he thought everyone thinks like him. He said “oh this is so great because now more and more people will have more and more friends!”

So far, the message has been received 1.8K comments and shared by more than 9,500 people. Thousands of people have also ordered a similar shirt from Rajahn, who has now created a site to sell for the same.

These English words have strange but interesting history

Six Interesting Ways to Celebrate Children’s Day in Your School