BOOK REVIEW: Against The Wind – A life’s Journey 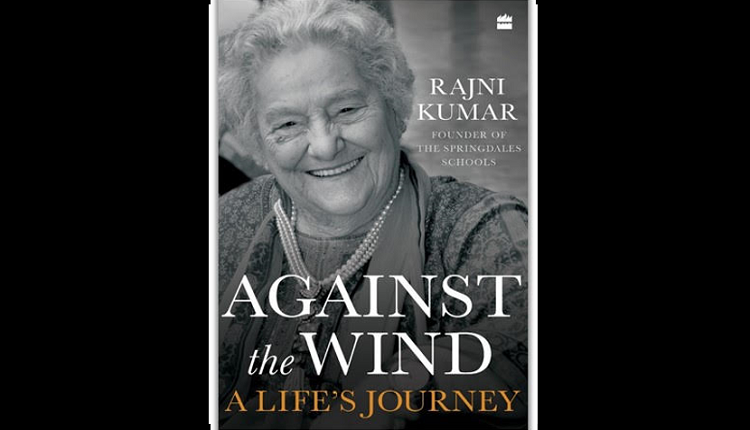 Rajni Kumar is a renowned name in the field of education in India. Founder of the Springdales Schools, she has received a number of national and international recognitions for her work, including the Padma Shri in 2011. While her educational journey is well-known, what is unknown is her personal journey – from British Nancie Joyce Margaret Jones to Indian Rajni Kumar. Her book, Against The Wind – A life’s Journey, is where she pens her life’s story.

The book starts with her arrival in India. She was then 23-years-old, and had hardly travelled outside the UK. But in 1946, she landed in India, all by herself, because her beloved was suffering from tuberculosis (a life-threatening disease at that time). Her decision to visit India was instantaneous, not even once thinking about her own life or the unfamiliarity of the place with respect to people, culture or language. Her only concern being the welfare of her fiancé, an Indian citizen Yudister Kumar. The two had met at London where they were studying, and soon fell in love. Such was the bonding between the two that once in India, Jones never thought of returning to the country of her origin.

Her entry into the education sector happened by chance. Soon after India’s independence, an Army school in Kasauli meant for the children of the British Army had closed down. When officers of the Indian Army moved there, they needed a school for their children. The job was offered to Rajni. She had been in India for only two years, and that too in sanatorium looking after Yudister. She knew little about Indian culture and education system. But that did not deter her from taking up this opportunity.

There was then no looking back. From Kasauli, the family moved to Delhi where Rajni took over as the Principal of Salwan Girls School, Rajender Nagar. During her five year stint, she learned a lot about education and administration, experience that helped her when she started Springdales from her home. Her family members and friends helped her in her mission, and soon the school spread its wings not only in Delhi but other places of India and abroad. At 96, she is still actively involved with schools in the capacity of the chairperson of Springdales Education Society.

Against The Wind – A life’s Journey talks about her journey, disappointments, courage, discovery, joy and love. But most important, it is wonderful tale of how a positive bent of mind can make a person do wonders. As Rajni writes in her book, “There is no one in this world who has not faced major difficulties at some stage of life, but however great they may appear to be, there is none that cannot be tackled effectively if we have the grit and the courage to overcome them and accept life as it comes.”