Book Review: My Name is Tani… and I Believe in Miracles 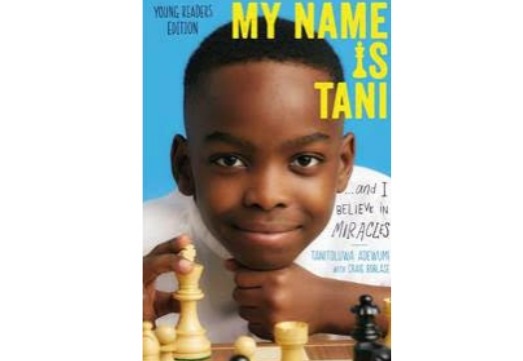 This book is a story about an eight-year-old boy Tani Adewumi, his journey from being a refugee in the US to becoming one of the youngest chess champions of the state. This is also a story about his belief in the power of miracles.

Tani and his family are forced to seek asylum in the USA after their family faces threat from Boko Haram in Nigeria. Their ordeal finally ends at a New York City homeless shelter. From here, begins the new journey and struggle of the family.

Tani’s father, who belonged to the royal Nigerian family, becomes a dishwasher to support his family. His mother looks after the home and the children – Tani and his elder brother Austin. Once the family is granted asylum, the children are sent to school to complete their education. It is here that Tani learns to play chess. Seeing his talent, his coach asks him to join the paid chess programme at the elementary school, but the family can’t afford it. His mother thus writes to the coach, who offers to teach Tani for free. Encouraged by his coaches, Tani soon discovers his own talent and interest for chess, and starts participating in chess championships (again sponsored by his coaching institute). He surprises everyone when he wins the 2019 New York State Chess Championship after playing the game for only a year. The win also changes their lives completely – the family moves from a shelter home to an apartment, his father becomes an Uber driver and mother takes up a job. Tani too is no longer an ordinary child but a celebrity.

What makes this book a wonderful read is that not even once will you see Tani or his family members complaining about their past. From a well-to-do family in Nigeria to becoming a refugee in the US, the life has been harsh for the family. There comes a time when even home-cooked food becomes a luxury for them. But instead of moaning, they thank the God for small mercies or ‘miracles’ as the family puts it. The fact that they escaped Boko Haram alive and are together is one miracle for the family. Other prominent instances which Tani describes as miracles are: getting asylum and a shelter in the New York city; and meeting his chess coaches who offer him scholarship. The book is full of such ‘miracles.’ As Tani writes, “Miracles are all around you. All you have to do is open your eyes and look.”

The book also contains Tani’s chess tips which will not only help you in improving your game of chess but also living a positive life. Some of his chess tips are:

My Name is Tani… and I Believe in Miracles is a story of optimism and innocence. It leaves you with a feeling of gratitude and positivity; and helps you discover the power of miracles. As Paulo Coelho said, “Miracles only happen if you believe in miracles.”

Do read it to get inspired!

BOOK REVIEW: Against The Wind – A life’s Journey

Not Just A Civil Servant